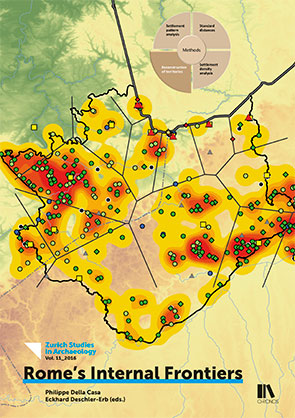 The Roman empire was subdivided into provinces that served as units for administrative purposes. But, what do we know of the boundaries of these provinces and of their internal structure? Not much. In order to better understand the nature and function of the empire’s internal frontiers, and to assess the territorial, social and economic structure of provincial organization, an international project was launched by the University of Zurich.
An interdisciplinary group of European scientists gathered in Rome in 2016 in order to present and discuss first outcomes of this initiative.
The question of Roman provincial borders can be addressed in various ways. A critical analysis of written sources gives insight into the significance of borders for political and tax organization. The study of landscapes and settlements by means of geographical information systems (GIS) allows to visualize topo-geographic structures, and to propose effective lines of border, as in the case of the frontier between Germania superior and Raetia. By analyzing the production and distribution of specific material culture such as pottery, coins or costume, economic structures become apparent; moreover, areas of cultural habits can be studied with regard to provincial borders. Bioarchaeology is yet another approach: besides providing information on human dietary habits, animal bones and botanical remains also contain evidence on environment, animal husbandry, crafts, trade, social structures, and religious beliefs. These spheres could all exhibit regional characteristics, and thus be questioned with regard to spaces and frontiers in Roman provinces. The named topics are exposed in a dozen contributions, written in English and German, and all are fully illustrated.

born 1963, studied Archaeology in Mayence and Basel. His dissertation (1995) was on Roman metal finds from the vicus of Vitudurum in Switzerland, his habilitation (2008) on Romanization processes in northeastern Gaul with the example of Basel-Münsterhügel. He has engaged in a series of projects dealing with Roman provincial archaeology, and has recently been appointed professor for the Archaeology of Roman provinces at the University of Cologne.