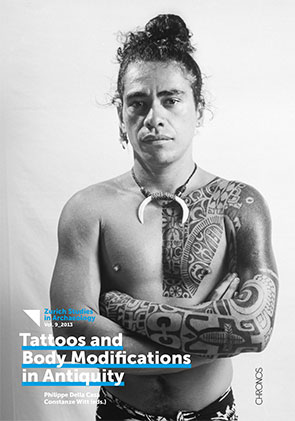 From Ötzi the Iceman to today‘s full-sleeved and pierced urbanite, it seems that body modification has always formed an integral part of the human animal‘s relationship to its body. Some adornments are temporary or purely situational, such as particular body paints, jewelry or hair treatments, while others – such as tattoos – are quite permanent and, when we are very lucky, preserved in the archaeological record.
The papers presented in this volume result from two thematic sessions on «Tattoos and Body Modifications in Antiquity» organized during the annual meetings of the European Association of Archaeologists (EAA) in The Hague and Oslo in 2010/11. They deal with a variety of topics, from the Pacific to the American continents and to Eurasia, including early evidences of tattooing and methods of detection, tattoo implements and experiments, as well as iconographic contexts and cultural meanings of tattoos and other body modifications, such as cranial deformations or cosmetic applications. Many new finds are discussed, and presented for the first time to an English speaking audience.

has a curriculum in Classical Archaeology with a special focus on the relationship between «Barbarians» and Mediterranean people. After spending many years as a lecturer at the University of Austin in Texas, USA, she currently lives in Hawai'i.