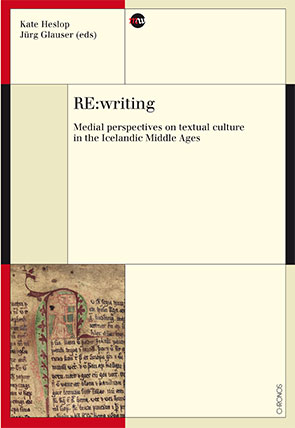 Medial perspectives on textual culture in the Icelandic Middle Ages

With editorial assistance from Isabelle Ravizza

Among the texts examined are Sturlunga saga, a narrative cycle depicting the bitter feuding preceding Iceland’s loss of independence in 1262/4; Hauksbók or «Haukr’s Book», a manuscript «micro-library», containing among other things a history of the Christianisation of Iceland, narratives about legendary Vikings, the story of Troy, and computistical material; Víglundar saga, an exemplary romance in saga form; grammatical treatises in which native poetry is analysed in terms of classical rhetoric; and a tiny sixteenth-century manuscript of the vita of St Margaret, written as an amulet for the scribe’s pregnant daughter. Showcasing medially-focused responses to a wide range of medieval writing and textuality, the collection demonstrates the promise of a medial approach to Iceland’s extraordinarily rich and long-lived textual culture.

is a post-doctoral research fellow on the project «Mediality: Historical Perspectives» at the University of Zurich, Switzerland. Her main research interests are in medieval Scandinavian literature and culture, and media studies.

«The lengthy and detailed introduction (pp. 9–59), co-authored by the two editors, lays out the theoretical approach that serves as a backdrop for the thirteen articles contained in the volume. [...] The quality of the present volume is quite uneven. The introduction by Heslop and Glauser is informative and clearly structured, and the concrete examples used to illustrate the theoretical approach of mediality are particularly well chosen and thoughtful. Some of the articles by the contributors are of high quality and constitute original contributions to the area of Old Norse-Icelandic Studies.»