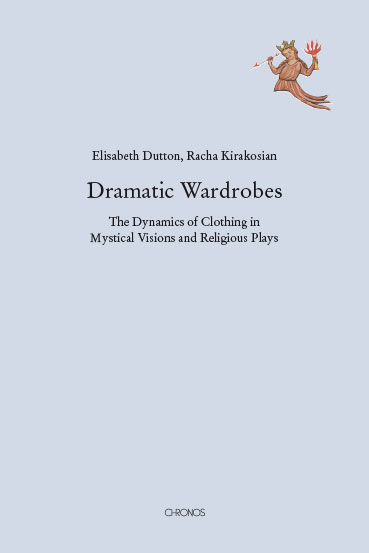 The Dynamics of Clothing in Mystical Visions and Religious Plays

Drawing together well-known and less familiar works from English and German writers, and focusing on references to clothing, Dutton and Kirakosian argue for important connections between medieval visions and medieval plays. Reading across genres and languages, with particular attention on writing by women and on the figure of Mary Magdalen, the authors explore the dynamic power of clothing as a catalyst for imaginative processes in writers, readers and spectators alike.
The authors draw connections between visions and plays that may be, initially, surprising, given the social nature of theatre that contrasts with the intensely personal and subjective nature of the visionary experience. While an audience provides collective witness to a play, the visionary, almost by definition, sees something that others do not: the visionary makes an audience of one for a drama presented – at least according to the believer – by God. By contrast, in the visionary text the visionary seeks to re-present her vision, in literary form, for a wider audience of readers, and to stir their belief in it. Julian of Norwich writes for all her ‘even-christians’ an account of the ‘Revelation of Love’ that God gave her in ‘sixteen shewinges’: her visionary text may thus be compared with, for example, the Easter play from Redentin that creates for its spectator a ‘series of beautiful devotional images’ (gar meng schön andächtig figur) that should each be contemplated by the viewer as a ‘showing’ (zeigen). While the play text may be predominantly pragmatic, and the visionary text descriptive, in both genres the act of seeing is to the fore – and clothing, as the authors show, is particularly richly ‘seen’.

is Professor of English at the University of Fribourg and researches the English-language literature of the Middle Ages. She was formally Fellow of ­Worcester College, University of Oxford.