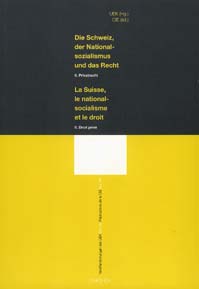 This investigation illustrates different legal aspects of the trade with foreign securities that took place during the Second World War, the problem of German assets in Switzerland, and that of unclaimed assets. Focal points of the contents are legislation on restitution in Switzerland in 1945/46, the Washington Agreement of May, 25 1946, as well as the Federal Decree of December 20, 1962. In the introduction, reference is made to the legal sources in Switzerland prior to the 1945/46 decrees of the Federal Council.
On the basis of the special powers given to the government at the time, the Federal Council had not issued any special regulations in civil law concerning trade with looted or confiscated securities, or other movable assets until the end of the Second World War. The same applied to unclaimed assets until the Decree of the Federal Council of December 20, 1962 became effective. For any legal questions with respect to looted assets, the regulations of the Swiss Civil Law Code (Schweizerisches Zivilgesetzbuch ZGB) on property and its stipulations regarding the acquisition - in good or in bad faith or dishonestly - of movable property as well as money and negotiable finance instruments (Art. 933-936 ZGB) applied until the Decree of the Federal Council of December 10, 1945 became effective. For unclaimed assets, the regulations of the Code of Obligations applied, in particular with respect to prescription deadline and the contracts pertinent to bank transactions.
During the period in question, the privilege of trade on the Swiss stock exchanges was not regulated at a Federal level. The Federal authorities therefore basically lacked the possibility of intervening to regulate the securities trade on the stock exchange. During the Second World War, however, the Federal Council could have issued special regulations based on emergency law to protect owners dispossessed by the German occupation forces. Such a step was not taken, presumably first of all for political reasons. On the other hand, the stock exchanges kept so-called affidavits. Thus, in December 1940, official stock exchange transactions with Dutch, French, Polish, Danish and Norwegian titles were permitted only if an affidavit had been provided confirming that said title had, without interruption since September 2, 1939, been the property of Swiss citizens, legal entities, or trading companies with residence in Switzerland. However, the obligation to submit an affidavit only applied to the trade on the stock exchange, meaning that outside the stock exchange titles were traded even without proof of Swiss ownership. At a later date, securities were also traded on the stock exchange with affidavits L1, confirming Swiss ownership only as of June 1, 1944.
Immediately after the end of the war, Switzerland attempted by means of three Federal decrees to facilitate claims for restitution of assets confiscated by the occupation forces in the occupied territories. Of crucial importance was the Decree by the Federal Council of December 10, 1945 (Decree on Looted Assets). According to this emergency law, the bona fide purchaser of an object under obligation to be returned, was entitled to obtain restitution of the purchase price from the unauthorized seller. The state of Switzerland was liable for compensation if the seller or his predecessor - as a rule a Swiss bank - had acted in good faith and purchased the titles from a bank abroad or a foreign seller who could not be held liable in Switzerland. The question of good faith in this context was to be judged in accordance with the general regulations in Art. 3 ZGB.
Swiss banks at the time carried out orders for the transfer of assets and the assignment of titles to special accounts of German and Austrian banks if the customer had signed the order himself, or if the authorized person was able to identify himself with a valid power-of-attorney. It must be assumed that the signing of such orders by victims of the Nazis was very often done under coercion and intimidation. From a legal point of view, the general rule applies that banks have to execute the orders of their customers without delay. On the other hand, according to the principle of good faith, the banks were committed to refuse the execution of contracts if they had reason to believe that the order of the customer had been obtained illegally.
After the end of the war, the question of the handling of German assets in Switzerland arose. In this context, Switzerland took the position that the claims of the Allies for an expropriation of German assets without compensation were in stark contradiction to Swiss public order. Under massive pressure by the Allies, Switzerland finally agreed in the Washington Agreement of 1946 to liquidate assets of all kinds deposited in Switzerland by Germans living in Germany. It has to be emphasized, however, that with respect to German assets, the Washington Agreement was not implemented fully in accordance with its content.
This legal expert study finally treats the legal questions connected to unclaimed assets. Among the legal problems investigated are the opening of accounts and deposits, the prescription of entitlement to restitution, the obligation to safekeep documents, the payment of interest on deposits, the administrative obligations of the banks, and the question of the obligation to conduct enquiries about customers. Before the Federal Decree of December 20, 1962 had become effective, these questions were governed by the ordinary regulations of Swiss civil and commercial law. The Reporting Decree of 1962 ultimately obligated all managers of assets in Switzerland to report assets for which dependable information had not been received since May 9, 1945 and for which it was assumed that the last known owners had become victims of racial, religious, or political persecution. After expiration of the ten-year validity of this Federal Decree, the regulations of the Swiss Civil Law and the Swiss Code of Obligations once again became applicable.

Pronouncements of Swiss Courts relating to the Nazi Regime of Injustice in the Area of Private Law, under the Inclusion of the International Law of Civil Procedure and of Enforcement (Focal Point: Public Order)

This study refers to legal questions in connection with the trade in looted cultural assets in the years from 1933 to 1950. In the first part of the expert report, the legal situation prevailing in Switzerland during the period in question is presented, with the principles of private law on the derivative acquisition from unauthorized sellers, as well as the Federal Decree on Looted Assets of December 10, 1945 as points of focus. The second part of the investigation deals with the basic principles of restitution of cultural assets as they were and still are applied in various foreign countries.
Swiss Civil Law Code (Schweizerisches Zivilgesetzbuch ZGB) recognizes secondary (derivative) acquisition in good faith of movable assets from an unauthorized person, differentiating between two situations relevant for trade in looted cultural assets. In the first scenario, if the legal owner entrusted the object of art to a person (voluntary relinquishment of ownership) and this person sells the cultural asset to a bona fide purchaser, the right of ownership passes to the purchaser (Art. 933 ZGB). If the legal owner, however, is deprived of the ownership of an object against his will, the bona fide purchaser will acquire said object after a five-year period of forfeiture (Art. 934 Para. 1 ZGB). A special regulation is applied in the case of acquisition at public auctions. Such an acquisition is privileged insofar as the purchaser is obliged to restitute the art object to the owner within the five-year period of forfeiture only against reimbursement of the price he had paid (Art. 934 Para. 2 ZGB).
On the basis of these civil law regulations, which were also in effect during the Nazi period, a bona fide purchaser was able to legally acquire «Nazi-looted art» in Switzerland immediately or after expiration of the five-year period of forfeiture. A purchaser was considered to be acting in good faith in accordance with Art. 3 Para. 2 ZGB if he could not be blamed for the lack of awareness about the illegal origin of the looted assets. Good faith thus required a certain degree of diligence. Despite the character of art objects as being unique items with a fluctuating market value, legal doctrine and jurisprudence of the time did not assume any increased duty of diligence on the part of art dealers. Only recently has the opinion begun to prevail in supreme court rulings that in the case of trade in works of art, increased diligence is to be required of all parties involved.
Against the background of various Allied declarations and agreements promulgated in the period of the Second World War (London Declaration of January 5, 1943, the Bretton Woods Conference of July 22, 1944, the «Currie Agreement» of March 8, 1945, laws decreed by the Allied Control Council in 1945), the Federal Council on December 10, 1945 issued a decree concerning claims for the restitution of assets plundered in the occupied territories (Decree on Looted Assets). This Decree granted injured parties the opportunity - within the December 31, 1947 deadline - to request restitution of looted cultural assets, irregardless of whether the current owners had acted in good faith or not. According to the Decree on Looted Assets, the (bona fide) purchasers, now obliged to restitute looted objects of art, had the right to file a counter-claim against the seller and, as an ancillary measure, to file a claim for compensation by the Confederation if the deceitful seller was insolvent or could not be sued in Switzerland.
The Federal Supreme Court's Chamber for Looted Assets which, according to the Decree on Looted Assets possessed jurisdictional competency in claims for looted assets, dealt with claims for restitution and with counter-claims in several cases concerning looted assets. The restitution proceedings investigated by the author were characterized by the fact that all art objects in question were returned either on order by the court or voluntarily. In the case of counter-claim proceedings against art dealers and the Confederation, the good faith asserted by purchasers and art dealers as well was recognized; only in assessment of the amount of compensation by the Confederation was the negligence of art dealers taken into account as a mitigating factor.
In the second part, the author analyzes the fundamental principle of restitution of art objects (models for settlement) as they are applied in several foreign countries. He comes to the conclusion that the position of Switzerland in the case of claims for restitution was not different from that of other countries in comparable situations.